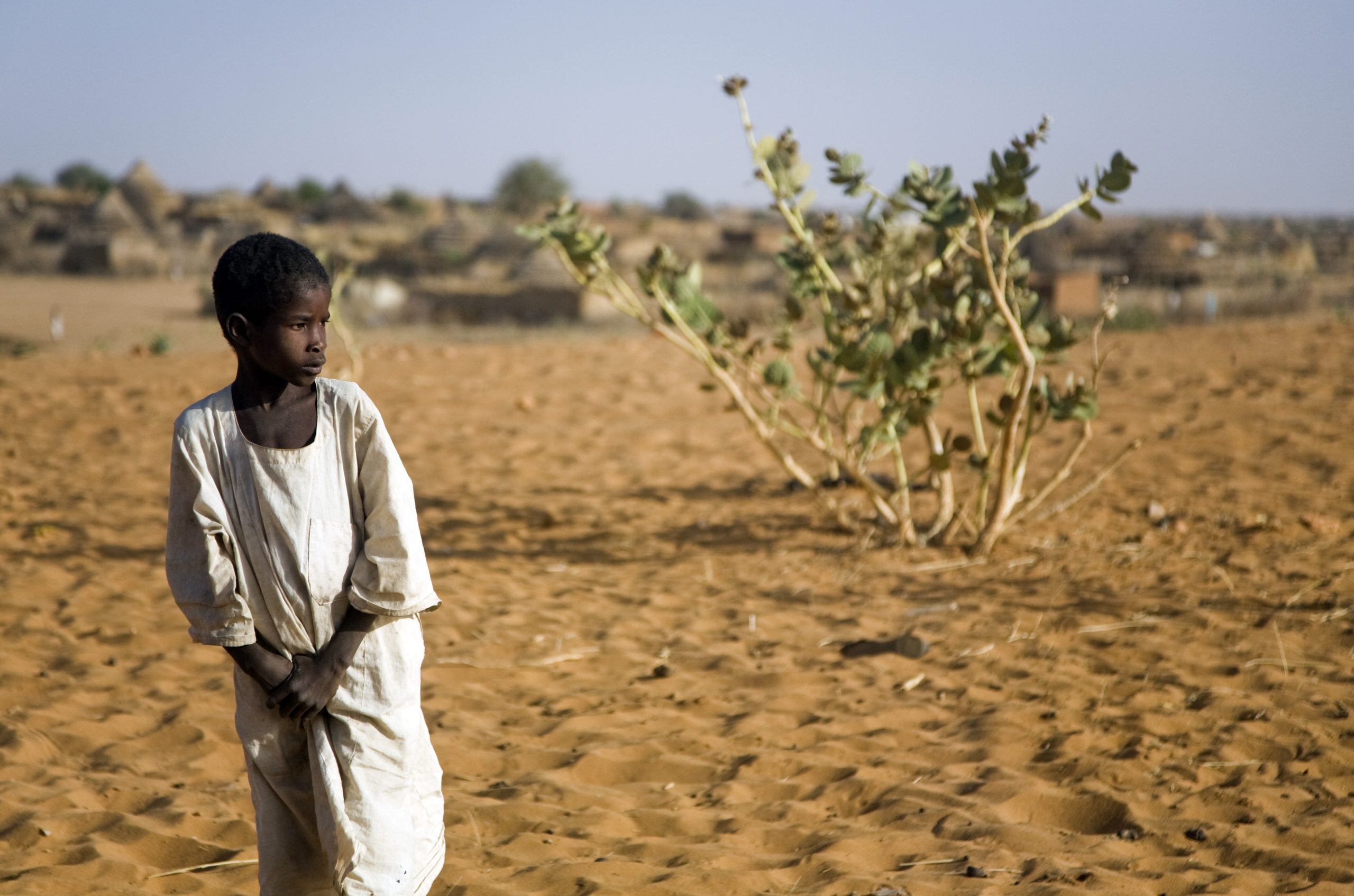 By Maddy CrowtherJanuary 17, 2023Features
No Comments

For almost twenty years now, I have been trying to alert the world to realities of genocide in Darfur—and to continue those efforts even when Darfur was no longer a human rights cause célèbre. Mine was the first declaration in a prominent public venue—The Washington Post­­—that what we were seeing in Darfur was not inter-tribal fighting but large-scale, ethnically-targeted human destruction and displacement, with thousands of villages and locales burned, looted, made uninhabitable. The date on my column in The Post was February 25, 2004—and it echoed my even earlier comments published in Africa InfoServe on December 30, 2003.

Although I had not made it to Darfur during my monthlong trip to Sudan in January 2003, I was only a few miles away when I stopped in Marial Bai (South Sudan). Serious medical issues prevented my traveling subsequently to Darfur or eastern Chad, but the information made public that year by human rights organizations, humanitarian organizations, and journalists made it impossible to mistake the ambitions of the Khartoum regime and its militia allies. As a communique from the North Darfur headquarters of notorious Janjaweed leader Musa Hilal had declared: “Change the demography of Darfur. Empty it of African tribes.” That effort was well underway by the end of 2003.

Surprisingly, given Darfur’s remoteness and geopolitical inconsequence, international advocacy efforts would grow with astonishing vigor and scale throughout 2004 and several years following. Under the vague rubric of “Save Darfur,” a host of voices—more and less informed—began to force Darfur onto the world stage. For those interested in how this vast movement—comparable in a number of ways to the campaign to end apartheid in South Africa—atrophied and then essentially disappeared, I invite a perusal of the extensive archives on my website. But the broader effort would soon wither, and here I must highlight the egregious failure of the Obama administration, despite the declaration of presidential candidate Obama:

“When you see a genocide in Rwanda, Bosnia or in Darfur, that is a stain on all of us, a stain on our souls. We can’t say ‘never again’ and then allow it to happen again, and as a president of the United States I don’t intend to abandon people or turn a blind eye to slaughter.”

But turning a blind eye was precisely what the Obama administration and its succession of special envoys for Sudan did. Indeed, at one point a senior administration official declared publicly that that Darfur and the Darfur genocide would be “de-coupled” from central issues between Washington and Khartoum (mainly involving terrorism).

There were some who asserted that the ethnically-targeted destruction in Darfur was not genocide. Some declared it to be genocide—but then changed their assessment, even as human rights documentation and other reports made it increasingly clear that the term as defined by the 1948 UN Convention on the Prevention and Punishment of Crimes of Genocide was clearly appropriately deployed.

Some would later argue that the genocide had ended. And there were cycles in the intensity of violence in the years following 2003 – 2006/2007. But the violence never ended; the internally displaced persons and refugees in eastern Chad were not able to return to their homes and villages and farms, nor were internally displaced persons, because of terrifying insecurity, insecurity that continues to this day. The number too fearful to return home may again be approaching 3 million human beings if we include the Darfuris who remain refugees in camps along the Chad/Darfur border, estimated by the UN to exceed 350,000 people, with continually diminishing humanitarian resources.

News coverage, even human rights reporting, was slowly strangled by Khartoum. There can be no other explanation for how The New York Times could publish a piece in February 2012 declaring in a photo caption that “peace has descended on Darfur.” This was unaccountably, grotesquely inaccurate and the very next year would see the beginning of a new, widespread campaign of genocidal violence.

Reporting on Darfur’s realities was also greatly diminished by the March 2009 expulsion of thirteen of the world’s finest humanitarian organizations from Darfur (some had earlier been forced to leave, others would later be). These expulsions made tragically clear that the Khartoum regime of Omar al-Bashir (who had been recently indicted by the International Criminal Court) was determined to end anything remotely adequate in the way of an international presence in Darfur—and this extended to the relentless abuse, curtailment, and attacks on the UN/African Union Mission in Darfur (UNAMID).

This nominally protective force, fashioned in wholly expedient fashion by the UN Department of Peacekeeping Operations in summer 2007, made all too clear than the UN Security Council has no power to provide protection for either civilians or humanitarians in the face of sovereign opposition, even if the sovereignty is defined by the most ruthless, brutal, finally genocidal ambitions. When UNAMID completed its withdrawal from Darfur in 2021, it had failed miserably in fulfilling its central mandate and will go down in UN peacekeeping history as perhaps its greatest failure.

Over the years following the 2009 expulsions—which were designed by Khartoum to deny humanitarian assistance to millions of people—almost no one at the UN or in the international community dared to use the word genocide, even as well-documented ethnically-targeted violence continued on a large scale, and has continued to grow over the past two agricultural seasons (2012, 2022). Even by 2014 it had become all too possible to write column with the title “Darfur: The Genocide the World Got Tired of.”

But in tiring of the Darfur genocide, the world was forced to forget what was represented by the extraordinarily revealing words of former regime vice-president Hassabo Mohammed Abdel Rahman, as reported by Human Rights Watch in its historically important report on the Rapid Support Forces, the “New Janjaweed” (September 2015).

A speech by the vice-president, addressed to troops about to begin assaults on civilians in the area known as East Jebel Marra, was recalled by a defector, according to lead Human Rights Watch researcher Jonathan Loeb:

Ahmed, a 35-year-old officer in the Border Guards, spent two weeks at a military base in Guba in December 2014 before being sent to fight rebels around Fanga. Two senior RSF officials, the commanding officer, Alnour Guba, and Col. Badre ab-Creash were present on the Guba base.

Ahmed said he was then given direct orders from Colonel Badre, who explained that they were going to attack the area of Fanga and the orders were to kill all the rebels and all of the civilians because they were supporting the rebels. Badre told the officers that if they found any women they were allowed to do anything they want to them, which [he] interpreted to mean rape.

“Clear the area of insects”: could there possibly be any failure to understand just what these hideously evocative words meant?

I spent a great deal of time myself over the following years tracking and reporting on the predations of the Rapid Support Forces, the creation of President al-Bashir in 2013. The commander of this savage, undisciplined, and heavily armed militia force was and is Mohamed Hamdan Dagalo, better known as “Hemeti.”

Hemeti is now the second most powerful man in the military junta that came to power in Sudan by coup d’etat on October 2021, less than half a year after the withdrawal of UNAMID. Hemeti controls tremendous national wealth in Sudan, especially gold—and given the size of his RSF, essentially a second army in Sudan, and the most powerful force in Darfur, he may well seek ultimate political power.

Whatever the outcome of present efforts to create a fig-leaf civilian government, Hemeti’s grim legacy in Darfur is all too well established. For a project I began with a Darfuri colleague in Zamzam IDP camp (North Darfur) in 2020—focusing on responding to the needs of victims of extreme sexual violence over the past 20 years—I am obliged constantly to read accounts of these victims, and the role of the RSF in either perpetrating these terrible crimes or enabling them. The trauma and physical injuries girls and women have endured are simply soul-destroying; and yet as far as know, there is no other comparable project in Darfur, even as we may be sure that many tens of thousands have been victims of sexual violence.

Given Hemeti’s continuing power, and the insatiable appetite of the RSF for ethnically-targeted violence, we may be all too sure that the future will look far too much like the past.

I thought that I’d written my last sustained words about genocide in Darfur three years ago, in a piece published only on my website (“What Will Be Remembered? History and the Darfur Genocide,” September 2019).

What I’ve offered in the preceding words is some account of what motivated the writing of this piece, the outrageous occlusion of the 21st century’s first genocide. But I offer nothing that I’ve not said many times, on many occasions, to many audiences and readers. So I’d like to conclude with what I might call a “parable for Darfur,” as much for autobiographical reasons as any other:

As you reflect on the continuing suffering and destruction in Darfur, I would ask you to imagine a very different place, outside of history or geography, where people of all ages enjoy a magnificent happiness—a rich, sustained, at times ecstatic happiness. I don’t have space to give you all the details, but Ursula Le Guin has described this place in her haunting story, “The Ones Who Walk Away from Omelas.”

What we learn in this story is that the extraordinary happiness of those in Omelas is just as extraordinarily contingent: it depends entirely upon the suffering of a single child, who is confined to a remote basement, denied adequate food, medical attention for her festering sores, and denied, most consequentially, all human companionship.

The people of Omelas know of the child’s suffering; indeed, the terms of their happiness are such that they must know of this suffering, even as they can do nothing about it. Were the child to be rescued, this happiness would end immediately, for everyone. It’s not easy to accept, but they do, because their joyous and collective happiness depends upon the child’s suffering. So, too, do the various impressive cultural achievements that are integral to happiness in Omelas.

These are the terms, and everyone knows them—and knows as well that any attempt to change them will bring an end to the community’s happiness. When adolescent children first learn of these fiercely strict terms, there is regret, sorrow, even rage; yet eventually they come to accept the arrangement.

But quite remarkably, sometimes a young woman or man doesn’t accept these conditions—sometimes they leave Omelas, each alone. They leave Omelas, Le Guin writes, “walking into the darkness, and they do not come back. The place they go towards is a place even less imaginable to most of us than the city of happiness. I cannot describe it at all. It is possible that it does not exist. But they seem to know where they are going, the ones who walk away from Omelas.”

My hope is that we not forget the children of Darfur, and that we continue to walk towards a world in which genocide and its destructive aftermath are never forgotten, where we need not be reminded that “never again” is merely a phrase without our living it.

Maddy is Head of Communications, Research & Asylum at Waging Peace. Maddy holds a degree in International Politics, with a focus on African politics, from Cambridge University. She has a background in communications and public affairs with consultancy Linstock Communications.