Does fortune favour the brave?

By WagingPeaceApril 3, 2022News
No Comments

This is a question posed by this blog by Robin Lustig, a former BBC presenter, and current journalist and broadcaster, in his blog below, which he kindly prepared for us.

Other questions his writing poses are: does how you arrive in the UK matter when it comes to seeking sanctuary? What about the unavoidable circumstances of your birth, the passport you hold, your age, or the colour of your skin? Who is deserving of our protection, and who gets to decide?

After reading, please do let us know your thoughts on email or our Twitter or Facebook accounts, and importantly follow the suggested readings and actions below to take action.

Imagine an 18-year-old girl, living alone with her mother, desperate to flee to safety to escape a genocidal regime.

She and her mother both apply for asylum in the UK. The 18-year-old is lucky: a relative in London offers to sponsor her, but her mother, aged 42, is ruled to be too old to be allowed in.

The teenage girl was my mother, who fled from Nazi Germany in July 1939. I have her German passport in front of me as I write. It was issued by the Nazis with a large red J for Jew on the first page. Inside is a stamp that reads ‘Leave to land granted at Southampton this day on condition that the holder registers at once with the police and does not enter any employment other than as a resident in service in a private household.’

Her mother had to stay behind in Germany. War broke out five weeks later, and in 1942, she was deported to Lithuania and murdered. I thought of her when I heard Michael Gove boast in the House of Commons last month that ‘our country has a long and proud history of supporting the most vulnerable during their darkest hour.’

Here’s another story: this time, the refugee is a 20-year-old man who arrives in England on his own from Berlin, having left his parents behind. With the help of a relative, he finds a family of academics in Cambridge who take him in and arrange a job for him as a builder’s labourer. Fourteen months later he is arrested and interned on the Isle of Man as an ‘enemy alien.’

After just six weeks, he is released and allowed to enlist in the British army. He ends up working in a top-secret military intelligence unit, which is where he meets his wife-to-be.

That man was my father, and in 1989, fifty years after he and my mother arrived in England, they threw a huge ‘thank you’ party for all their friends. They never forgot that they owed their lives to Britain – but nor did they forget the thousands of others who never made it. (Footnote: my father’s parents managed to get out of Germany in 1940, and spent the war years in Portugal.)

Now fast forward to 2003, when a 42-year-old man – the same age as my German Jewish grandmother – fled from his homeland after being captured and tortured by another genocidal regime. He made it to the UK, where, like my parents, he made a life for himself and eventually became a British citizen. His wife and two sons, who had stayed behind, were all murdered, and in January last year, on a return visit to his home country, he was shot dead during an armed attack by a pro-government militia.

His name was Sharif Barko and he came from the Darfur region of western Sudan. (You may remember that at one time the Darfur genocide was a big news story, but by the time Sharif died, it had been all but forgotten.)

And in case you’re wondering what’s happening in Sudan now, there are still more than two million people displaced by the Darfur war; the UN has just warned that up to 18 million people could be facing extreme hunger within months, and there’s been an upsurge in violence since the military coup last October.

But now it’s Ukraine that is in the headlines. More than four million – four million! – refugees have fled the country since Russia invaded in February: two million of them are in Poland; 370,000 in Moldova, the poorest country in Europe; 270,000 in the Czech Republic; and 240,000 in Germany.

Like my parents, and like Sharif Barko, they all fled in fear of their lives. They sought sanctuary wherever they could find it – and to their immense credit, the 27 members of the European Union threw open their doors and offered unrestricted access to all of them, including residence and work permits, housing, health care and education.

Not the UK, though. By the end of last month, the UK had issued a desultory 25,000 visas. The government’s record is utterly shameful, and it stands in sharp contrast to the outpouring of support from the British people: nearly 200,000 offers of accommodation and more than £260 million raised for the Disasters Emergency Committee Ukraine appeal.

Instead of welcoming refugees, which Michael Gove would have us believe is our ‘long and proud history’, the government is now proposing to make it all but impossible for them to get here. Under the terms of its controversial Nationality and Borders Bill (aka the Anti-Refugee Bill), many of those fleeing from war or persecution would be sent to off-shore camps to wait for their asylum applications to be processed, or even stripped of their right to seek asylum if they are deemed to have arrived in the UK by ‘irregular’ means.

And no one, of course, from Sudan. No one like Sharif Barko. No one – how can I put it? – who doesn’t have white skin.  Or a few million dollars in the bank. 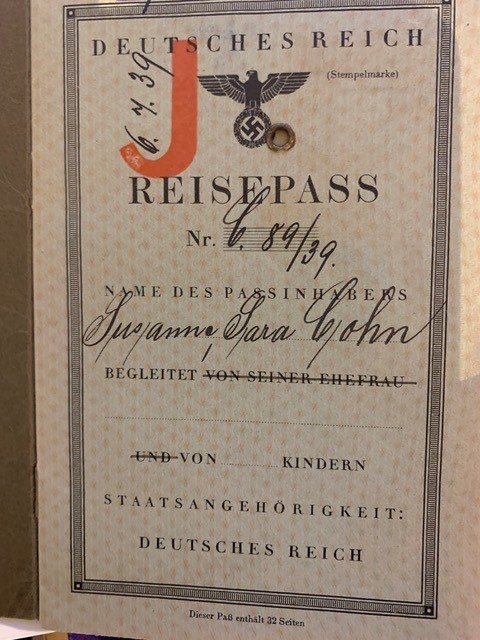 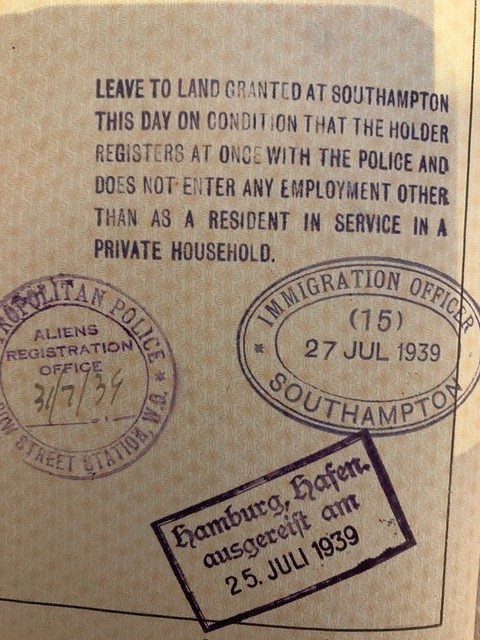 Pictures from the passport of Robin Lustig’s mother, provided by author

For more on the life story of Sharif Barko, read the one prepared by Holocaust Memorial Day Trust, alongside Haringey Welcome here.

The Nationality and Borders Bill returns to the House of Lords this week, after which time it will return again to the Commons, so it is important that you write to your MP now to ask them to oppose it and key amendments which would criminalise certain routes to safety and help protect all refugees.