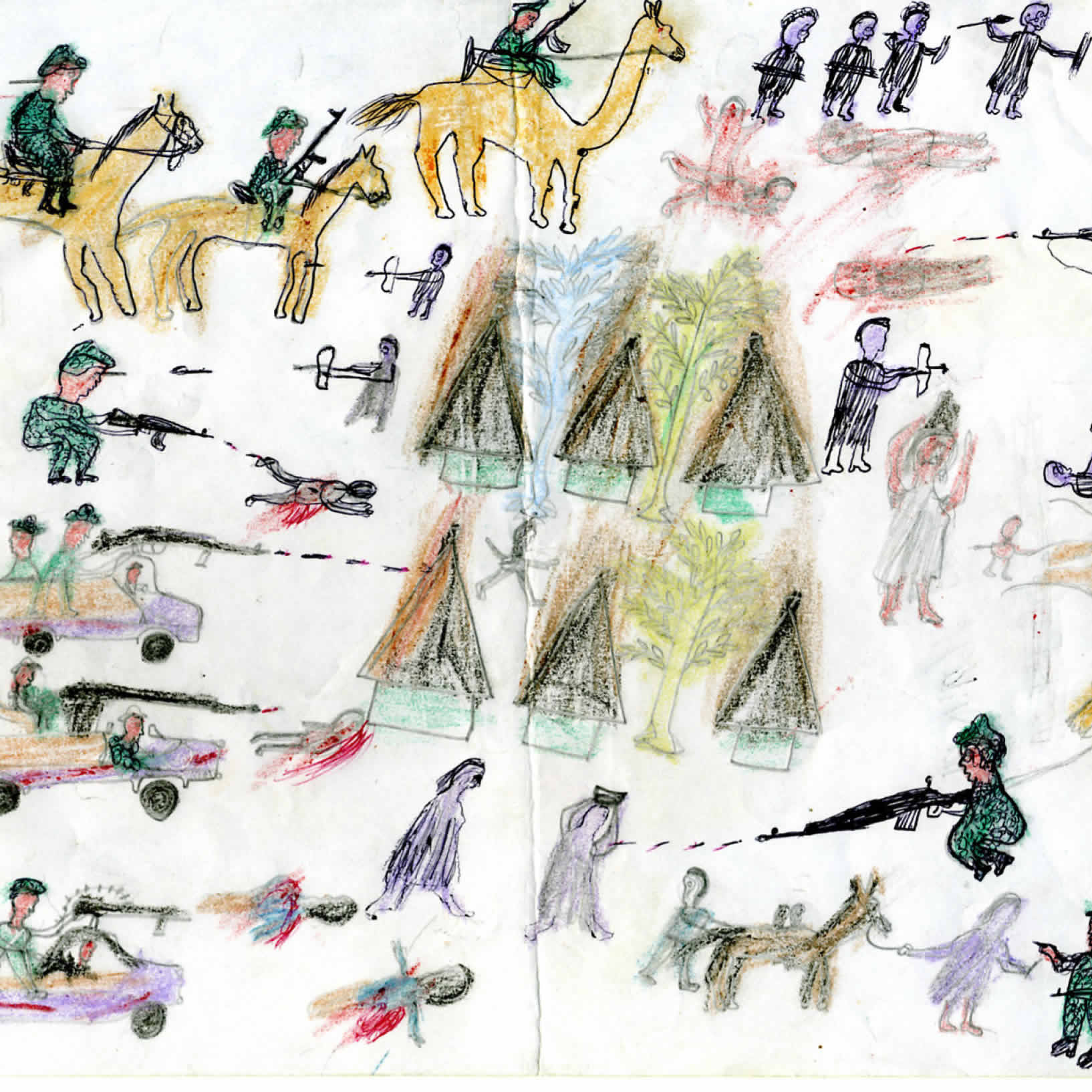 By WagingPeaceNovember 21, 2019Features
No Comments

How do wars impact people’s everyday lives? How do they impact children’s memories and perceptions on life, and how do those affected reflect these memories and events?

The war in Darfur, which started in 2003, harvested more than 300,000 souls. Sexual violence was widespread, and the scorched earth policy which was adopted meant many villages were destroyed and burned. Accordingly, 2.5 million Darfuris fled their homes and sought safety and security internally or in neighbouring countries.

Sample above is from collection of over 500 Darfur children’s drawings obtained by Waging Peace now archived at The Wiener Library. Image on left drawn by a young girl, image on right a young boy, both fled their villages during the height of the genocide in 2003.

The International Criminal Court (ICC) issued an arrest warrant against the previous Sudanese President Omar Al Bashir for war crimes, and crimes against humanity; and then in 2010 added criminal responsibility of genocide for the atrocities that were committed in Darfur. Alongside him, Ahmed Haroun, Ali Koshib, and Abdel Raheem Mohamed Hussein are also wanted by the ICC.

In 2007, Chad hosted more than 230,000 Sudanese refugees who fled the conflict in Darfur, living in 12 refugee camps run by the United Nations Higher Commission for Refugees (UNHCR). That same year, the researcher Anna Schmitt visited Sudanese camps in Eastern Chad for three weeks, as part of fact-finding mission, to assess the humanitarian, human rights, and security situation in the region, and to collect testimonies from Darfuri refugees and displaced Chadians.

Part of Anna’s interviews were with mothers who told her about their children’s experiences during the conflict, which motivated her to talk to the children, and then, for them to reflect on their memories, she gave them papers and pencils to draw.

Their drawings reflected the atrocities of the conflict in Darfur, furthermore, they reflected the trauma of those children. As part of an interview with Ananmosa, who published “Deflagrations: Children’s drawings and adult wars”, a book that has 150 drawings by children in different conflict areas dating from World War I until the current conflicts in Syria and other countries, including Anna’s collection from Darfur, he said:

I remember a girl, very young, perhaps not yet six years old. She had drawn a woman lying on the ground with a red face. She told me this woman was dead. I asked her why the face was red, and she looked at me as if I were stupid. “Because they shot her in the head,” she said. She was six years’ old and she said that naturally, calmly. I do not know what kind of trauma she had grown up with.

Children went through so many traumatic experiences that were hard to capture verbally, but more easily expressed through art. Their drawings also hold testimonial strength. In 2007, the ICC accepted the Darfur children’s drawings as contextual evidence of crimes committed in that region. These drawings have been exhibited in many places around the world.

Anna Schmitt also collected testimonies and a petition with 60,000 signatures from Sudanese in the camps who were calling for international intervention by the United Nations to protect Darfuris. The petition provides valuable documentation of crimes that happened in Darfur, people were explaining why they want international intervention, elaborating their grievances and burning sense of injustice.

In December 2018 Waging Peace’s Co-Directors visited the region and met Sudanese from the Nuba Mountains who fled across the border to South Sudan during the former regime’s campaign of terror against the Nuba people. Similar scenes of horror were depicted in the Nuba children’s drawings obtained by Waging Peace 11 years after the collection of those from Darfur. What did this illustrate? Darfuris were not alone in suffering atrocities perpetrated against them by their own government. So too had the Nuba. Children’s drawings collected from children from the Nuba Mountains offer another step forward towards documenting the dark, disturbing and largely under-reported part of Sudan’s history. Since December 2018 the Nuba children’s drawings have been on display alongside Darfur children’s drawings in many exhibitions and galleries of Sudan-related events.

In August 2019 The Wiener Library, the UK’s foremost archivist of Holocaust-related material, agreed to store the 60,000-strong petition, in partnership with us at Waging Peace. We are now in the lengthy process of translating and ordering these documents for historical posterity. On the 23rd of January 2020 both Waging Peace and The Wiener Library are planning a joint event where the researcher Anna Schmitt will give context to her experience in collecting the signatures for the petition and the Darfur children’s drawings.

These unique testimonies of Darfuris indicate the violations they experienced and the brutality of Al Bashir’s forces. Their drawings capture the fears and the dreams of those children, who should not be forgotten, and whose dreams should not be ignored. And the documentation of the Darfuri testimonies is an urgent task towards building a collective memory that acknowledges the war in Darfur and in the Nuba Mountains, and which remembers all its victims, and paves the way for a real process of transitional justice.

While Sudan is witnessing slow but hopeful democratic transition after the December revolution that overthrew the Islamist regime and established a transitional government, the issue of transitional justice remains at the heart of this process. The first step requires concrete documentation of the violations and atrocities committed by militias associated with the previous regime and other governmental forces. These drawings and testimonies will hopefully form part of this healing and transformative journey in national consciousness.