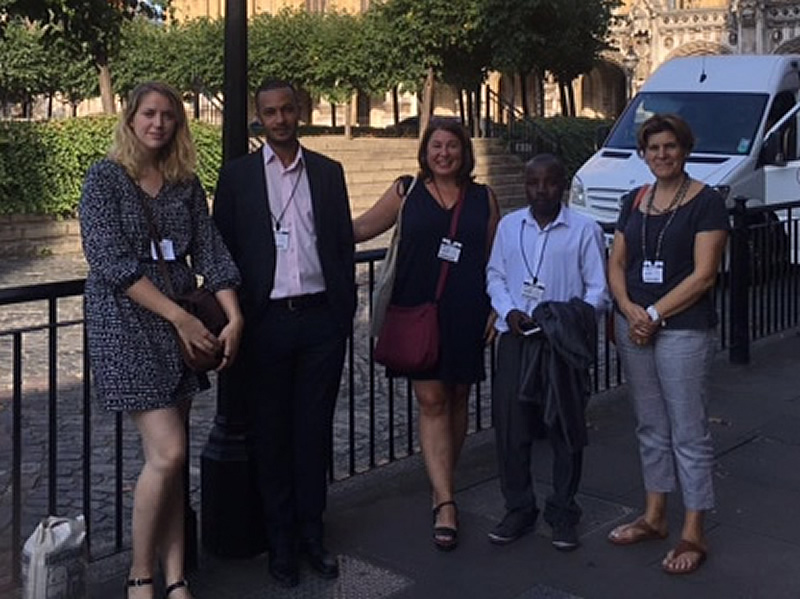 Raising the profile of Sudan in the UK

At Waging Peace, we constantly look for ways to raise the profile of human rights abuses in Darfur and Sudan more widely, by providing Darfuris and other Sudanese nationals with opportunities to speak out about the crimes they have suffered.

On this point over the past three years we have doubled our efforts to work with the Holocaust Memorial Day Trust (HMDT) to raise the profile of Darfur and Sudan in their activities. Each year HMDT holds events nationwide commemorating victims of the Holocaust, but also looking at recent and ongoing genocides under a new theme each year. For example in 2016 their theme was ‘Don’t Stand By’ and in 2017 it was ‘How Can Life Go On?’. HMDT’s London event in 2016, which we attended, was broadcast on BBC Two in front of thousands of British viewers. In fact Naomie Harris from the Academy Award film ‘Moonlight’ and the Bond films read powerful testimony in a video performance prepared from an interview with a young Darfuri woman.

We jumped at the chance to show the world what is happening in Sudan, feeding in contacts, testimony and information to raise awareness. I invite you to read a short newsletter we’ve compiled on our many successes as part of Holocaust Memorial Day at http://bit.ly/1Q53fwG.

But don’t just take our word for it, HMDT’s Chief Executive Olivia Marks-Woldman said Waging Peace “worked tirelessly … to ensure that the voices of Darfuri people were heard during HMD, and that all those marking HMD were encouraged not to stand by to the ongoing genocide in Darfur.”

This is just one of numerous projects we work on year-round at Waging Peace.