We regularly perform research and produce reports for policy, media, and public audiences. Some are aimed at raising awareness, and others at influencing policy, either to inform Foreign Office policy and practice or to improve Home Office decision-making on asylum, including via distribution to lawyers for use in individual cases.

Our reports are cited regularly by the Home Office in their Country Policy and Information Notes on Sudan.

A Hopeful Yet Fragile Peace: How the UK Can Support Sudan’s Democratic Transition (2020) [PDF]
Prepared for MPs ahead of an October debate in British Parliament.

Justice and Accountability in Sudan (2020) [PDF]
One year on from the 3 June 2019 massacre, we explore progress (or not) made towards justice and accountability for this incident as well as historic atrocity crimes.

Briefing on situation in Sudan following June massacre (2019) [PDF]
A massacre in Khartoum and other conflict areas in early June derailed tentative negotiations towards a free and just Sudan – our briefing explains how the UK can prevent further atrocities and respond now.

The UK’s involvement in the Khartoum Process as it relates to Sudan (2016) [PDF]
A description of this EU tool for addressing migration flows from the Horn of Africa, considering specifically the UK-Sudan relationship

Support organisations in Italy (2015) | English | Arabic [both PDFs]
Prepared in response to increasing numbers of asylum-seekers being returned to Italy as a third country, to help prepare them

The Cost of Inaction – Can Sudan Afford Five More Years with Bashir? (2015) [PDF]
Research compiling ways in which Sudan had suffered over five years since President Omar Al-Bashir’s appointment as

The Long Arm of the Sudanese Regime (2014) [PDF]
Our second report on risk on return for rejected asylum seekers to Sudan.

The border agency are playing a game to scare us (2011) [PDF]
A report by Waging Peace, Symaag and Northern Refugee Centre

The UN-AU Hybrid Mission in Darfur – Will It Work? (2007) | English | Arabic [PDFs]
Our consideration of the peacekeeping mission UNAMID’s effectiveness at the time of its implementation 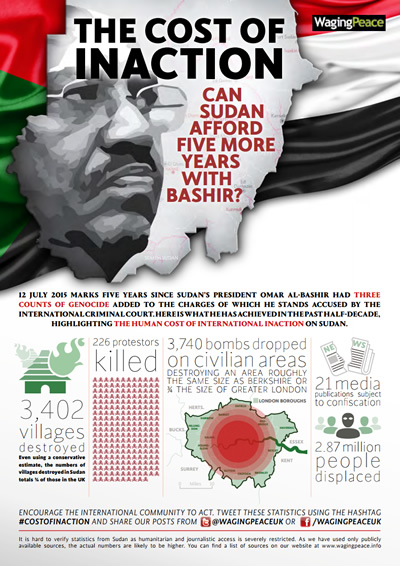